Author: Tony Roberts, creator of PyXLL, a Python library that makes it possible to write add-ins for Microsoft Excel in Python. Download a FREE 30 day trial of PyXLL here.

Python has a broad range of tools for data analysis and visualization. While Excel is able to produce various types of plots, sometimes it’s either not quite good enough or it’s just preferable to use matplotlib.

Users already familiar with matplotlib will be aware that when showing a plot as part of a Python script the script stops while a plot is shown and continues once the user has closed it. When doing the same in an IPython console when a plot is shown control returns to the IPython prompt immediately, which is useful for interactive development.

Something that has been asked a couple of times is how to use matplotlib within Excel using PyXLL. As matplotlib is just a Python package like any other it can be imported and used in the same way as from any Python script. The difficulty is that when showing a plot the call to matplotlib blocks and so control isn’t returned to Excel until the user closes the window.

This blog shows how to plot data from Excel using matplotlib and PyXLL so that Excel can continue to be used while a plot window is active, and so that same window can be updated whenever the data in Excel is updated.

Matplotlib can plot just about anything you can imagine! For this blog I’ll be using only a very simple plot to illustrate how it can be done in Excel. There are examples of hundreds of other types of plots on the matplotlib website that can all be used in exactly the same way as this example in Excel.

To start off we’ll write a simple function that takes two columns of data (our x and y values), calculates the exponentially weighted moving average (EWMA) of the y values, and then plot them together as a line plot.

Note that our function could take a pandas dataframe or series quite easily, but just to keep things as simple as possible I’ll stick to plain numpy arrays. To see how to use pandas datatypes with PyXLL see the pandas examples on github: https://github.com/pyxll/pyxll-examples/tree/master/pandas.

To add this code to Excel save it to a Python file and add it to the pyxll.cfg file (see for details). 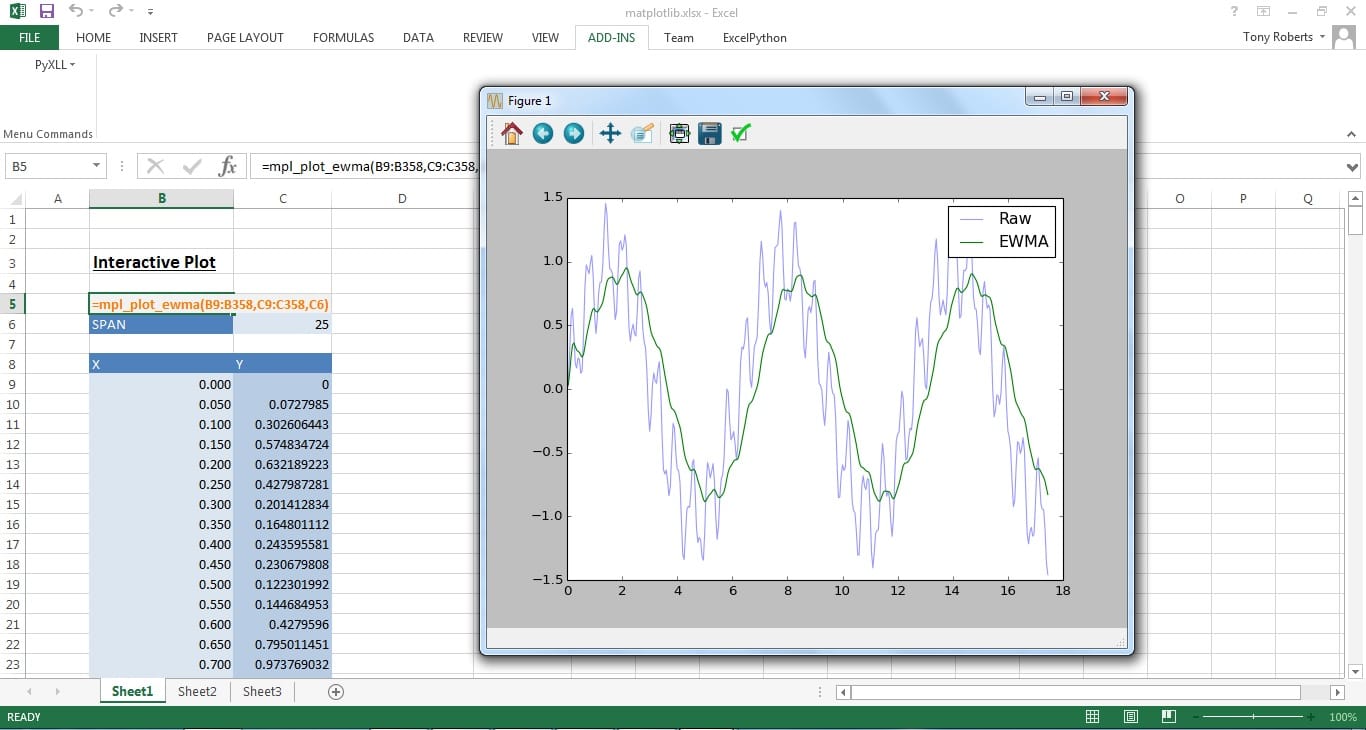 The unsmoothed data is generated with the Excel formula =SIN(B9)+SIN(B9*10)/3+SIN(B9*100)/7. This could just as easily be data retrieved from a database or the output from another calculation.

Matplotlib has several backends which enables it to be used with different UI toolkits.

Qt is a popular UI toolkit with Python bindings, one of which is PySide. Matplotlib supports this as a backend, and we can use it to show plots in Excel without using the blocking call plt.show(). This means we can show the plot and continue to use Excel while the plot window is open.

In order to make a Qt application work inside Excel it needs to be polled periodically from the main windows loop. This means it will respond to user inputs without blocking the Excel process, or stopping Excel from receiving user input. Using the windows ‘timer’ module is an easy way to do this. Using the timer module has the advantage that it keeps all the UI code in the same thread as Excel’s main window loop, which keeps things simple.

This can be used to embed any Qt windows and dialogs in Excel, not just matplotlib windows.

When the function’s called it brings up the plot in a new window and control returns immediately to Excel. The plot window can be interacted with and Excel still responds to user input in the usual way.

When the data in the spreadsheet changes the plot function is called again and it redraws the plot in the same window.

The code above could be refined and the code for creating, fetching and clearing the windows could be refactored into some reusable utility code. It was presented in a single function for clarity.

Plotting to a separate window from Excel is sometimes useful, especially as the interactive controls can be used and may be incorporated into other Qt dialogs. However, sometimes it’s nicer to be able to present a graph in Excel as a control in the Excel grid in the same way the native Excel charts work. This is possible using PyXLL and matplotlib and will be the subject of the next blog!

All the code from this blog is available on github https://github.com/pyxll/pyxll-examples/tree/master/matplotlib.

One thought on “Plotting in Excel with PyXLL and Matplotlib”